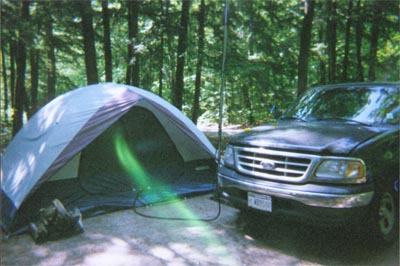 The WB9STR operating position
on the shore of Lake Huron
at the P.H. Hoeft State Park
Grid Square EN85 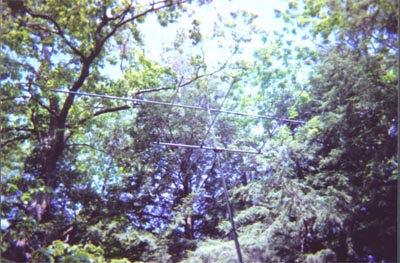 2 and 6 meter beams
just above the tent. 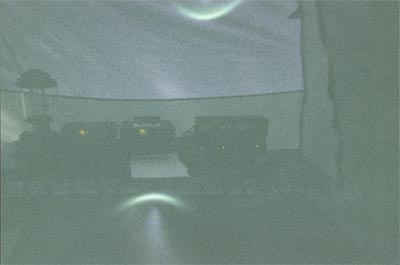 Inside WB9STR's operating tent.
A little dark but dry! 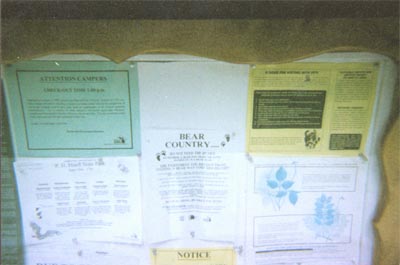 Note of the middle flyer posted in the park.
"Bear Country"

For many years I have dreamed of operating in a vhf contest from a rare grid square.  I picked EN85 in northeastern Michigan. This June I finally made up my mind to do it.

The bug really bit me last fall after the September vhf contest, so the next month I talked my wife into going on a short trip (480 miles each way), up to northeast Michigan to scout around for a good contest site. This area is not a hot spot of vhf activity and was considered to be a rare grid.

Loaded with the latest topographic maps, we drove around for two days looking for a good vhf site. Much to my disappointment, I couldnt find one.  All of the high spots were not accessible, or they were buried in a dense-forested area. It didnt look good.  I came home without much hope of returning to this area for the contest.

After a couple of weeks, the bug was still biting.  I kept going over the maps and I decided to try it anyway, hoping for some great propagation to make it worthwhile.  Since I couldnt find a spot on high ground, I opted for a spot on the shore of Lake Huron at the P.H. Hoeft State Park.  I had hoped that this would at least give me a clear shot into the Northeast and East Coast areas.  I made the necessary reservations and waited for June.

June finally arrived and it was contest time.  I put a quarter wave vertical antenna on the truck for 6 meters, got all of my camping gear together, all of the radio and antenna gear together and headed for Michigan.  I left at sunrise on Friday in order to arrive at the campsite early enough to get set up that evening. The forecasted temperature at home for that day was to be in the upper 80s and I was hoping for a great weekend.   The trip up was uneventful and I even worked several stations from Colorado and the East Coast on 6 meters while mobile.  As I got closer to my destination, the beautiful 80 degree weather turned into a wall of gray misty clouds and a temperature that was closer to 58 degrees.

It was about 2100Z when I started to set up camp. By this time the weather had deteriorated a little more and it was a steady drizzle, but I was busy getting everything set up and I didnt mind the coolness in the air. The station consisted of only 6 and 2 meters.  The antenna for 6 was a 3-element beam, and the antenna for 2 was a 12-element beam.  The power level for both bands was about 150 watts and everything ran on battery power. By 2300Z I was on the air testing out the contest station.

The first station worked was K3QII in Fm19 on 6 meters at 2324Z.  I worked six more stations from the East Coast before the band went dead, then the first of many thunderstorms came through and I had to shut down for the night.  That night it rained on and off with the temperature dropping down into the 40s.

Saturday morning I awoke to partly sunny skies but the temperature didnt get much higher than 60.  I turned on the radios with great expectations but both bands were dead. Murphy 1  Contester 0.  This will be a great time to put the voice keyer to work calling cq.  I found to my dismay that the keyer would not work with the type of mics. that I had.  Murphy 2  Contester 0.

No big problem, I still have a voice even if the temperature is dropping in the tent.  As the day wore on and after many unanswered cqs, the static level kept increasing with the added sound of distant thunder.  1800Z  contest time and the band is still dead.  1817Z  the band opens up and everyone from the Southwest is on 6 meters.  The band stayed open until about 2100Z and then I worked a couple of the stations closer in.  While all of this was taking place, Mother Nature was having an opening of her own, and by 0046Z the lightning was so close that I had to shut down.  Just as I was pulling the plug I could here a station from California working the contest.
Murphy 3  Contester 0.  The intense storm raged all night and I didnt know if a tree was going to fall on the tent or if lighting was going to find the aluminum antenna farm just above my head.  Another cold, rainy night without any operating. That was a long night!

Sunday morning it was still raining but the thunderstorms had departed. It was only in the upper 40s and I rigged up the sleeping bag on the operating chair to keep warm.  Once again I turned on the radios to find no activity at all.  I began calling cq and managed to scare up a couple of stations on 2 meters in the adjoining grids and one in Wisconsin, my best DX on 2.  Later that day, around 1800Z, I had a brief opening into Florida on 6 meters but only worked four stations.
After that small opening the band went dead and never opened again. Murphy 4  Contester 0.
Since 6 was dead, I thought I would try my luck on 2 again.  I keyed the 2 meter rig, and could not get any output. The rig would key up but nothing would come out. Murphy 5  Contester 0.
For the next 8 hours I could hear bits and pieces of contacts being made, but I was just out of the propagation window. That was a long day!

As I left the area, with the heater on in the truck, I still had this little bug biting me so I took a little detour and found a great spot on top of a 950-foot hill.  I just have to talk to the pastor of the church there to let me use his parking lot for the next time!  Maybe I can beat Murphy yet!

Greg WB9STR is a long time
Kankakee area ham and KARS member,
having held many different posts
over the years within the organization.
VHF contesting, DXing, Fox Hunting
and his 6 meter beacon station
are among his favorite activities.

This website is written in FRAMES.
If you are viewing this page as a separate page
please CLICK HERE for the KARS HOMEPAGE !